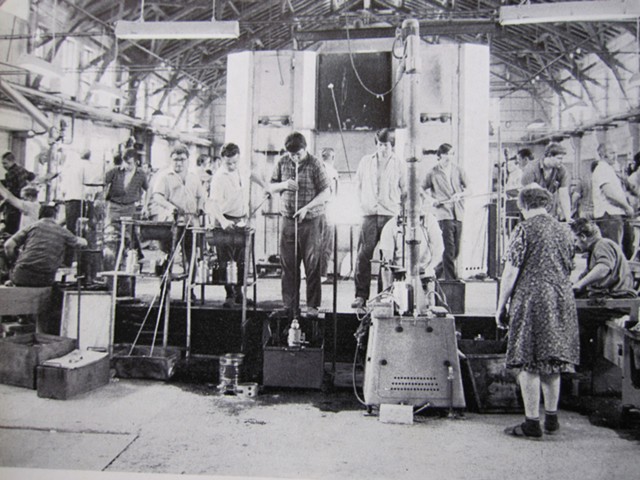 In Germany I grew up in an environment surrounded by traditional glassmaking. The nature of this craft was focused on skills designed towards the production of high-end decorative and functional glass objects Trained as a glass designer at the State School for Glass Making in Zwiesel Germany, I learned the techniques of enameling, engraving, cutting and designing glass. I was given the skills necessary to embellish a functional object with a sense of wondrous beauty. At the same time I felt the limitation of this process. I wanted to push the material further, I needed to find my personal voice in the craft and the vision I had of the purpose of these skills. I studied sculpture and painting at the Fine Arts academy of Cologne. There I discovered the freedom to translate my artistic visions in glass, which were supported and enforced by using the craftsmanship I acquired from the school of design. Although my studies at the Academy in Cologne were artistically open, I chose to continue working in glass but in a context more suitable to the philosophies of the fine arts. The fragility and translucency of the material afforded me an added dimension, an extra layer to enhance my ideas of humanities temporal existence. Glass allowed me an expression deeply connected to my vision. Beneath the surface, I could produce a mysterious world, a dreamlike atmosphere where connections are tenuous and brittle. Most of my work in Germany explored that dialogue between idea and material, between creating layers of meaning and the object. Glass was that magic canvas that connected it all.